In 2016, Veronica Pome’e packed her bathing suits for a trip to her parent’s native country, Tonga. During a beach excursion and a fun photoshoot, Veronica declared to herself and her family that one day she will be the first Tongan Sports Illustrated plus-size model.

Fast forward to three years later, Veronica found herself at a photoshoot in Paradise Island, Bahamas for the coveted Sports Illustrated swimsuit issue. Her dream had come true.

Being “The First” can be exciting for a person, however, Veronica doesn’t take the title lightly. “It’s an amazing feeling,” she admitted. “But I know that it comes with a lot of social responsibility.”

Veronica started off as a community advocate and youth leader in her hometown in Southern California. Encouraged by her own experiences as a lost and rebellious teenager, she wanted to offer the guidance and support she longed for at that age. She, along with some friends, started organizing community events as an outlet for the youth to creatively express themselves.

“I was one of those at-risk teens,” Veronica admitted. “I was very sheltered growing up so once I got the taste of freedom, my world was turned upside down. [Those experiences] brought me back to the community and is the reason why I want to give back to my peers,” she stated.

During a charity fashion show they planned, Veronica was approached by a designer and asked to walk for him during LA Fashion Week. Veronica immediately fell in love with modeling and started building her career. Five years later, she won an Instagram model search and signed with an agency. A few months later, Sports Illustrated launched its 2019 model search.

At the time, Veronica was working three jobs and was struggling to make ends meet. Even her agent at the time tried to discourage her from applying. “I thought to myself, what if I go and don’t make it and end up wasting all this money,” she reflected.  “But then I thought, what if I do go, and what if I make it all the way and what if I become the first Polynesian Sports Illustrated Model.”

During our interview, Veronica often talked about the power of belief in making things happen. She credits her obedience to her spirit and her lack of fear for failure as the driving forces to her success. “One thing that has been consistent in my journey, is my faith. I have always been led by my spirit to do the things that I do, which sometimes may come across as crazy.”

It is this faith that has kept her steadfast in her career for the past five years. In a world that body positive and diversity are being thrown around as an afterthought to mark the “representation box,” Veronica sees this as an opportunity to break down barriers in the industry and encourage other Pacific Islanders to pursue their dreams.

“For me, it is not just about being the first Polynesian Sports Illustrated model, but it’s about opening doors for many more of us to be the first of anything. I want people to look beyond what we’re normally known for, beyond athletics, beyond music- there are so many other things we are capable of.”

As we chattered for almost two hours, it was clear that Veronica had a deep sense of humanity that one wouldn’t normally expect from someone in her position. Every time she spoke, she spoke with deep and profound compassion for her family, her culture, and her people.

“Who I am is a lot bigger than just being a model,” she said. “I may have started with selfish reasons, but it has become bigger than that. It became less about what I want and more about what is needed for future generations to thrive.” 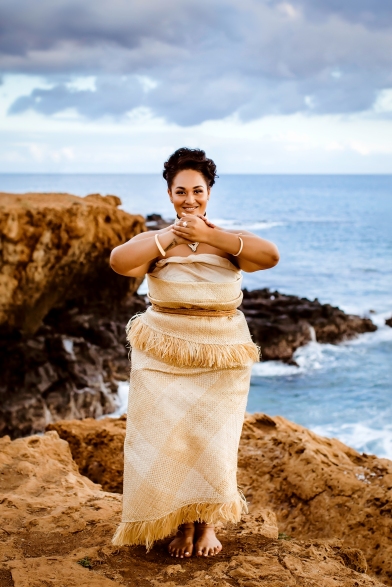 Pome’e grew up in Southern California with her parents and siblings. Like many of us Pacific islanders in the diaspora, Veronica often struggled with finding her identity as a Tongan- American. As a first-generation immigrant, she had trouble connecting with her roots in a society and culture that, sometimes, felt alien to what her parents tried to introduce to their household.

Mix that with the emotions of a normal teenage girl, and the results can be less than welcoming. Because of her athletic built, Veronica often felt awkward and out of place as a child, feeling bigger than everyone around her. “I never saw myself as pretty,” she contemplated. “I played sports and never thought highly of myself. I was also darker than many of my cousins, so I was always teased about that.”

The concept of colorism is not widely known in the South Pacific community however, it would be naïve to say it doesn’t exist. Essentially, colorism is the difference in treatment between light-skinned and dark-skinned individuals. “Growing up, I hated being out in the sun,” Veronica recalled. “It’s something all Polynesians go through – wearing long sleeves when it’s 100 degrees outside.”

This is an experience that I myself encountered from time to time—as grandparents and relatives would discourage me from going outside to protect my skin. This clear display of preferment of lighter skin can be attributed to colonial influence in the Pacific and how that has negatively affected our beauty ideals. It is so detrimental that skin bleaching has become a go-to beauty treatment in Asian-Pacific and African communities. “It’s the idea that the darker you are, the less attractive you are and the less wealthy.”

It was only during an encounter at the school nurse’s office that allowed Veronica to begin her journey to self-acceptance. “This lady there expressed how she loved my skin and that really helped me embrace and accept the skin I was in.”

Veronica’s struggles as a teenager have motivated her to use her platform as the First Polynesian Sports Illustrated plus-size model to help the next generation find their voices. She is currently writing a book and plans to create her own skincare line. She is also working on a youth program to implement in Tonga. “I’ve always been very passionate about helping people rediscover themselves and align themselves with their purpose and so, immediately, I knew that once I came into this position, that my social responsibility was to make sure that I help the youth.”

Veronica hopes to use her platform to empower the Tongan youth and bring attention to important issues affecting the Pacific. “I feel like if you’re a public figure or if you’re in the position to influence people, it is your responsibility to be informed on the issues that affect your community and be knowledgeable in these areas. For me, what good is your voice or platform if you’re not using it to elevate and bring our people up?”

Veronica Pome’e recently opened Chromat’s 10-year anniversary collection in New York City and was invited to speak about the importance of climate change at an event for Model Mafia. You can follow Veronica on Instagram at @veronicapomee.

iThere are no comments

This site uses Akismet to reduce spam. Learn how your comment data is processed.

Begin typing your search above and press return to search. Press Esc to cancel.